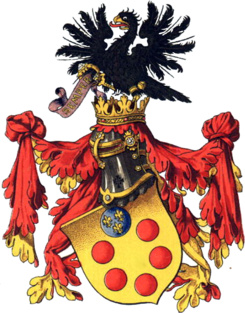 While the origins of pawnbroking can be traced back over 3,000 years to the Chinese, the industry as we know it today dates back to fifteenth Century Italy when the noble Medici family was a dominant financial power.

When the Medici family split in two, one half became bankers and the other half became pawnbrokers.  Those who became pawnbrokers took half the family crest as the emblem for their family business. As the original Medici Coat of Arms shown opposite incorporated six balls, the new emblem adopted by the pawnbroking side of the family had three balls. Over the centuries, these three spheres became the universally recognized symbol of pawnbroking.

It should come as no surprise that the origins of banking and pawnbroking are so closely entwined, after all pawnbroking is simply another form of banking. Pawnbroking today offers consumers a quick, convenient and confidential way to borrow
money. A short-term cash loan can be advanced with no credit checks or legal consequencesif the loan is not repaid.

In summary, customers pledge property as collateral, and in return, pawnbrokers lend them money. When customers pay back the loan, their merchandise is returned to them. If a customer elects not to redeem his or her collateral, there is no credit consequences to the borrower and the items are sold at a value price to retail customers.

Like a bank a pawnbroker earns income on the interest that is charged on the loan secured by a pledged item. In order to accept goods into pawn a pawnbroker makes an on-the-spot valuation of the goods. The customer and the pawnbroker will agree the sum to be advanced and the pawnbroker will then present the customer with a contract to review. The contract will display information such as the items pawned and the interest rate charged (3% per month). The customer having decided to go ahead with the transaction then signs the contract with details of his/her rights and the terms and conditions of the loan. The customer will then receive part of the document as a pawn-receipt for presentation when redeeming the goods.

The contract in Ireland is usually for a period of four months. The customer has the right to redeem property by payment of the original loan plus the amount due at any time during the contract period. When the loan and the interest are paid, the goods are returned to the customer. The Customer will normally also have the option of renewing the loan by paying the interest only and receiving a new contract for an additional four months. If the customer does not renew or redeem the pledged item within the four months as specified in the contract, the pawnbroker may take steps to dispose of the goods.

The reason that many pawnbroking businesses are very often jewellery retailers is that they already have the perfect shop set-up for lending and keeping goods safely in storage. Consequently, the security that the vast majority of pawnbrokers give loans against is gold, jewellery and watches. This is because they are:


A pawnbroker will lend from as little as €10 to many thousands of pounds in one easy, quick transaction that requires no credit checks, lengthy meetings or form filling. Short-term cashflow is the reason most people use a pawnbroker, where convenience and speed of service are quite unrivalled. A loan will just as often be obtained for some extra spending money as it will be to clear an outstanding telephone bill. It is flexible, transparent, competitively priced and immediate and it is these factors that customers prefer. The result is that a high number of customers are satisfied with the service they receive.